Social Media Usage In Australia (and Beyond)

If you’re looking for a social-savvy base of consumers, look no further than Australia.

Fact: a staggering 71% of all Aussies are active on social media. That’s over 18 million people.

And so for social marketers around the globe, there’s a huge opportunity in the land Down Under.

Because not only are Australian consumers plugged into social media at large, but they’re also among the most likely to do business via social.

That is if you’re reaching them in the right way.

Below we’ll take a deep dive into social media usage in Australia in 2020 and beyond. Not only will we break down the latest social trends in Oz, but also key statistics marketers should know.

What Are the Most Popular Social Media Platforms in Australia?

To kick things off, let’s talk about the networks that Aussies are glued to.

The short answer? Facebook and Instagram are by far the most popular platforms on the continent. Meanwhile, TikTok is booming with new users while Snapchat is surprisingly still growing in Australia as well.

Although some critics may say that Facebook is “dying,” the same can’t be said for Australian audiences. In fact, the platform boasts a record 16 million active users, half of which check in on the platform at least once daily.

Beyond the platform’s user base holding steady (and still growing), Facebook is uncharacteristically popular with the younger crowd. For reference, Australian users under 30 are using the platform four times as often as those aged 65 and older.

Another key point about Aussie users on Facebook is their distinct enthusiasm when it comes to ads As noted in our guide to setting up a Facebook Ad Manager account, the average social consumer in Australia clicks on 21 ads per month. That’s nearly double the global average.

Translation? Engaging with social ads is the norm for Australian consumers. That’s exactly why we’re seeing household name brands (like Coles below) and budding businesses alike invest more and more in Facebook (and Instagram!) ads. 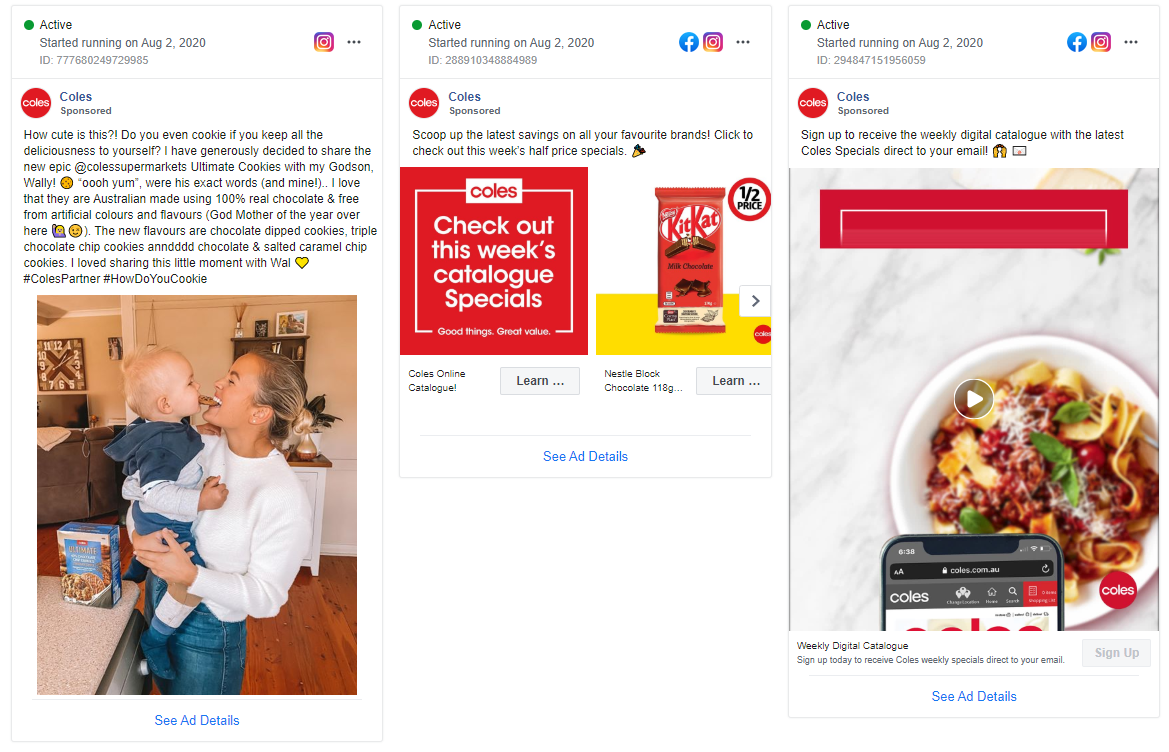 The demand for visual content (think: Stories and videos) combined with Facebook’s robust ad platform, it’s no secret why building a brand on Instagram is a no-brainer for Australian companies. Companies in the travel, outdoors, fitness and beauty industries are particularly popular right now. 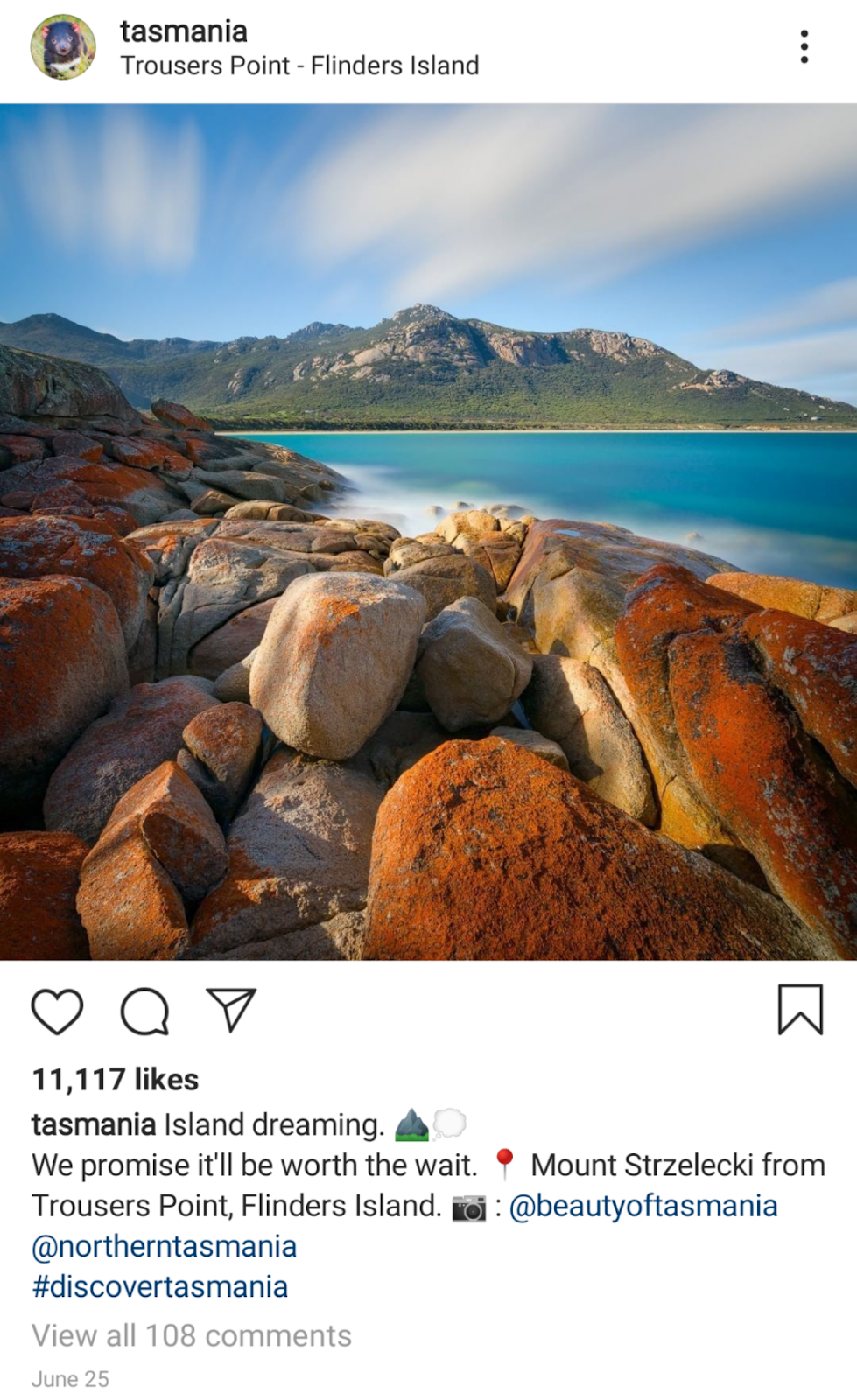 We can’t talk about social media usage in Australia without mentioning TikTok, a favorite of younger consumers which brands are still trying to figure out.

At the close of 2019, the platform had already amassed 1.6 followers in Australia. Notably, 1.2 million of those users were either Gen Z or younger. TikTok is also notable for its tendency to transform users into binge-watchers, with the average Aussie watching 25+ minutes of TikTok per day. Although Snapchat doesn’t seem to get much love these days, the platform still has legs in Australia. In fact, Snapchat’s 6.4 million monthly active users in Oz beat out the likes of Twitter and LinkedIn. 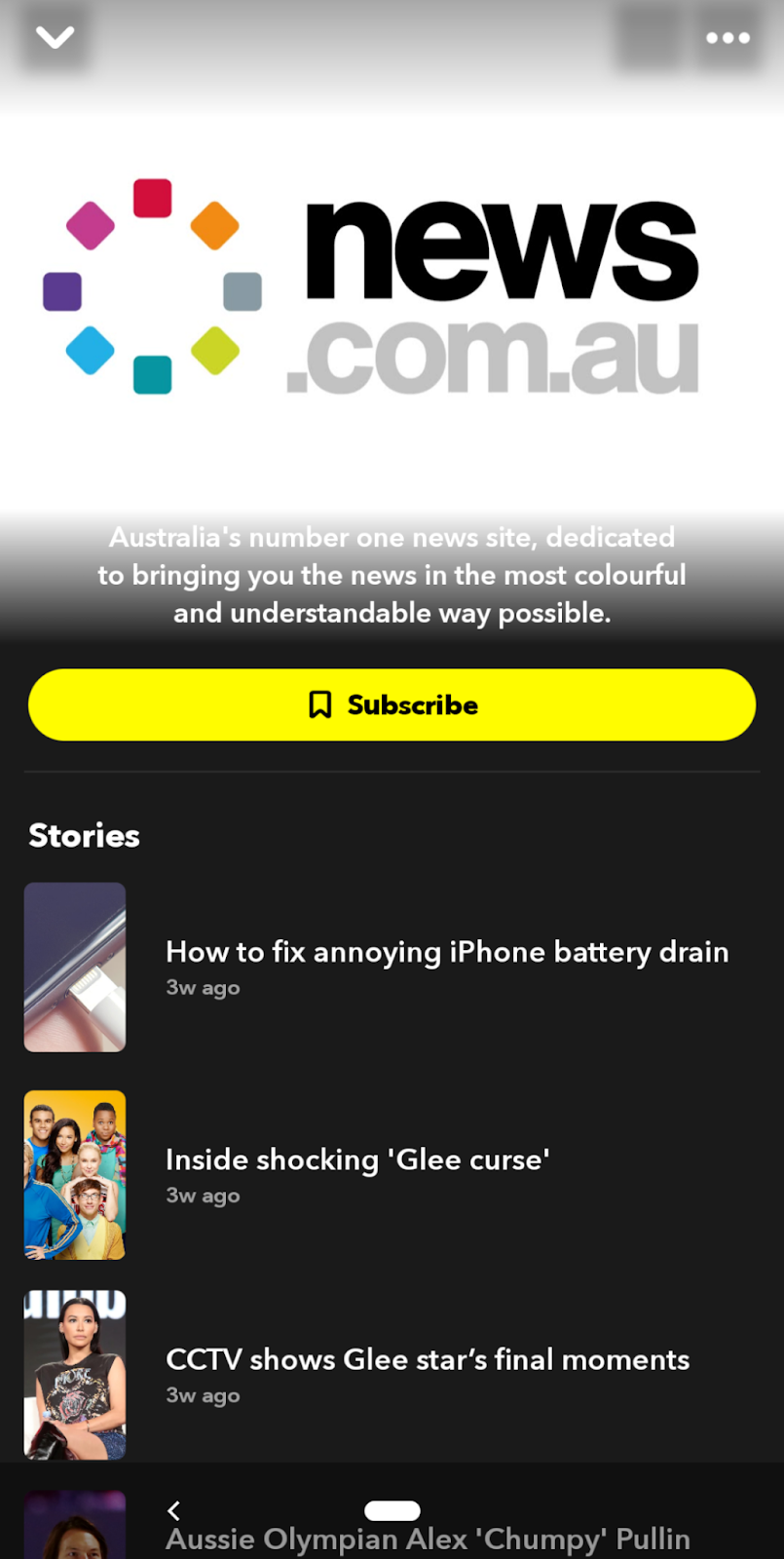 For reference, here’s how the major social media platforms stack up against in each in terms of growth across the continent: 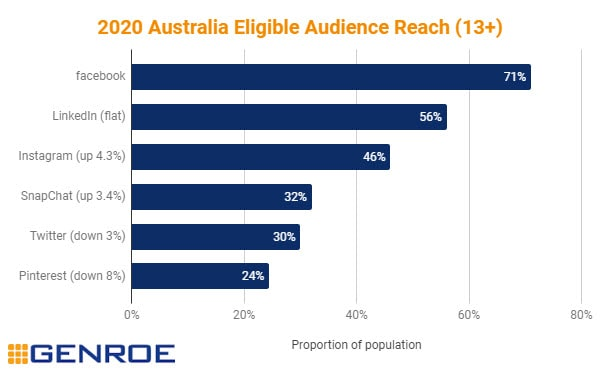 How Do Australians Feel About Doing Business via Social?

Here are some key takeaways from Yellow’s 2020 Social Media Report which surveyed 2,000 Australian consumers and businesses:

To say that Australian consumers are more than happy to engage with businesses via social would be an understatement.

In terms of what those consumers are looking for from brands themselves on social, it’s a combination of discounts (62%), giveaways (47%), product information (41%) and advice (32%). 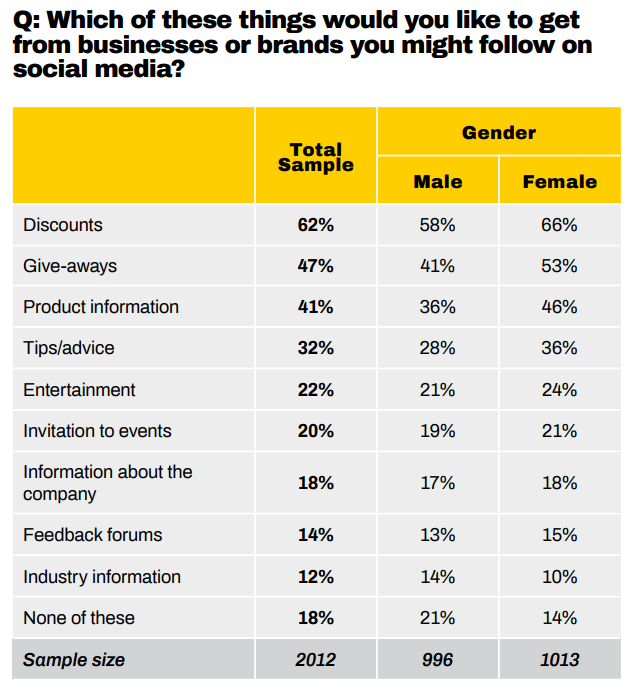 Here’s a breakdown of the data from the aforementioned Yellow survey:

Generally speaking, social media usage is either up or about the same for city-dwellers and users in rural areas alike. 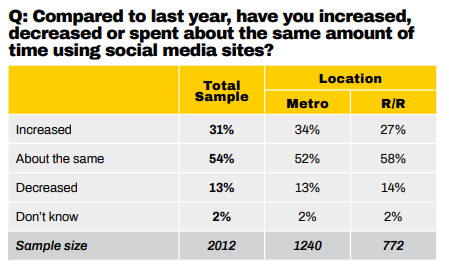 How Has Social Media Advertising Changed in the Wake of COVID-19?

As businesses adapt in the current crisis, the behavior of social consumers in Australia has changed as well.

Recent research shows that 39% of Australians consider themselves “more open” to engaging with social media advertisements in the wake of COVID-19. This puts Oz just behind Japan (46%) and the UK (45%) while edging slightly ahead of the United States (38%). 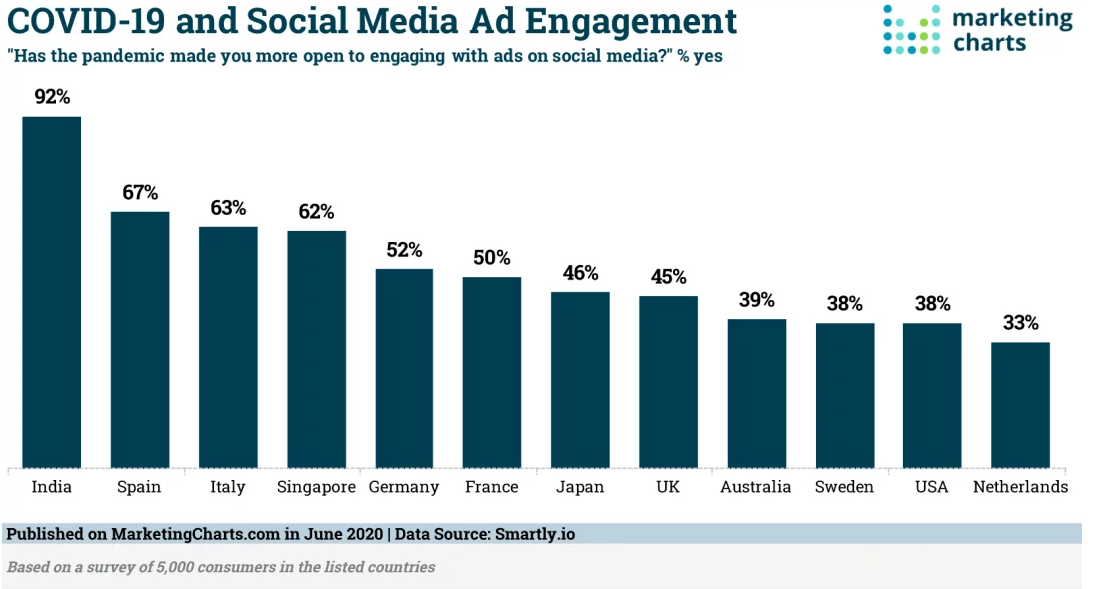 A recent McKinsey study notes that Australians are spending more time both planning purchases and minding how they spend their money during this crisis, too. 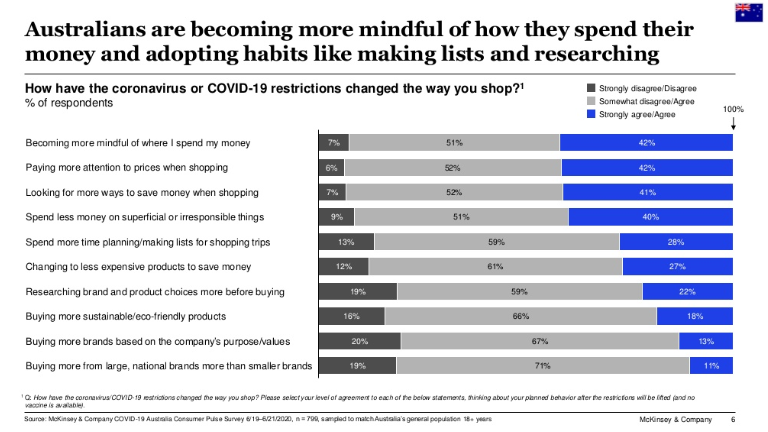 On a related note, 30% of those consumers are discovering new products via social media word-of-mouth and online advertisements. 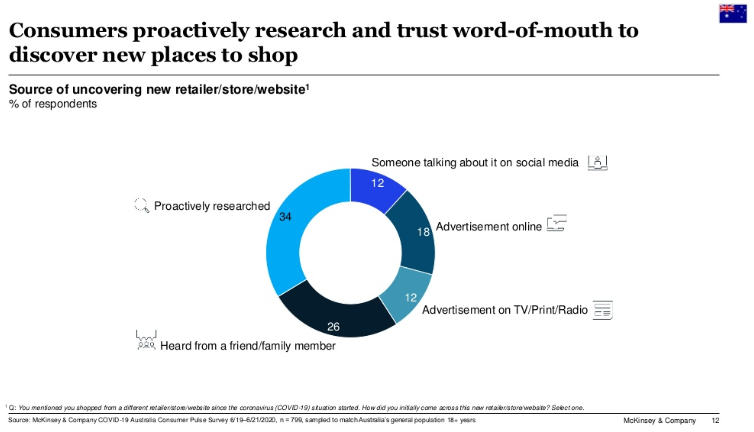 Social marketers don’t necessarily need to despair during COVID-19: they need to pivot. Consumers are rightfully concerned about how they’re spending, signaling the need for brands to embrace both empathy and making life easier on customers.

For example, brands such as Peace Out Skincare actually managed to expand into Australia and New Zealand by embracing organic social media, influencer marketing and an emphasis on bulk pricing during COVID-19.

Meanwhile, ads like the one below (which ranks in the top three most emotionally engaging COVID-19 campaigns) highlight how companies can tug on their customers’ heartstrings right now.

What are the Most Popular Messaging and Social Apps in Australia?

While they might be considered social media platforms per se, messaging apps such as Facebook Messenger and WhatsApp dominate the Australian marketplace.

Meanwhile, data from 42matters (as of August 2020) highlight TikTok, Instagram and Snapchat as the most-downloaded social apps in Australia. Note also that Facebook makes the top 10 list three times between its traditional app, “Lite” version and Messenger. 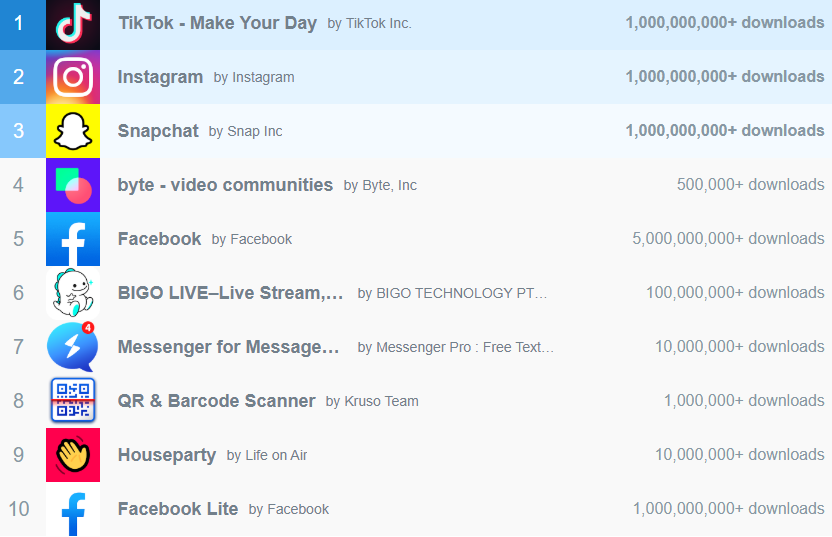 And with that, we wrap up our round-up!

How Do You Think Social Media Usage in Australia Will Change?

Just like the rest of the world, Australia is totally unique, and so are the country’s consumers.

Hopefully this breakdown managed to shed some light on the current state of Australian social media, including which platforms you should prioritize now and in the near future.

If you have any questions about how to reach an Australian audience or otherwise grow your following in Oz, make sure to get in touch with Hello Social today.