7 Powerful Tips to Grow on IGTV

Because there’s a non-zero chance your social audience is, too.

In fact, recent studies show that Australians are consuming video like never before. Not only have our binge-watching tendencies reached a peak, but so has our desire to consume video via social.

Put two and two together and the writing is on the wall: businesses need to get on board with social video ASAP.

Think about it. Facebook already prioritizes video as part of its recent algorithm change. Meanwhile, people are watching at least 40+ minute of mobile video daily on YouTube

This begs a big question, though:

However, one of their most recent launches signals just how much Instagram is betting on video as the future of social.

Which is exactly why IGTV deserves your attention.

What the Heck is IGTV, Anyway?

IGTV represents one of Instagram’s most significant launches yet.

In short, IGTV is a video hosting platform within Instagram itself, comprised of a series of “channels” comprised of content from brands and users alike.

Instagram themselves says IGTV is meant to “bring audiences closer to the creators they love.”

Although IGTV was announced in June 2018, the platform is still in its infant stages for users at large. If you’ve never experienced IGTV before, you can find it via the television icon on the top, right-hand corner of your home feed (or through the standalone IGTV app). 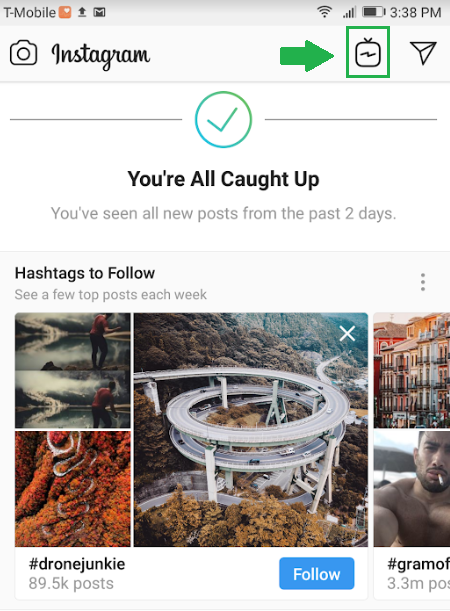 Once you tap through, you’ll be met with an autoplaying video from IGTV and a series of channels to scroll through. In a way, it’s much like turning on an actual television.

IGTV might seem a bit overwhelming at first, but the platform’s actually pretty straightforward. Content is presented and sorted by the following parameters:

For You: These videos are recommended based on accounts you follow and hashtags you’ve searched.

Following: These videos are presented solely from accounts you currently follow.

Popular: These videos are popular, trending videos recommended by Instagram.

History: A list of IGTV videos that you’ve watched in the past.

IGTV is a totally different beast versus the likes of Stories or native Instagram video. Beyond IGTV content being exclusive to the platform, the most notable aspects of IGTV are as follows:

What’s the Point of IGTV?

At a glance, you might be wondering why IGTV exists in the first place, right? 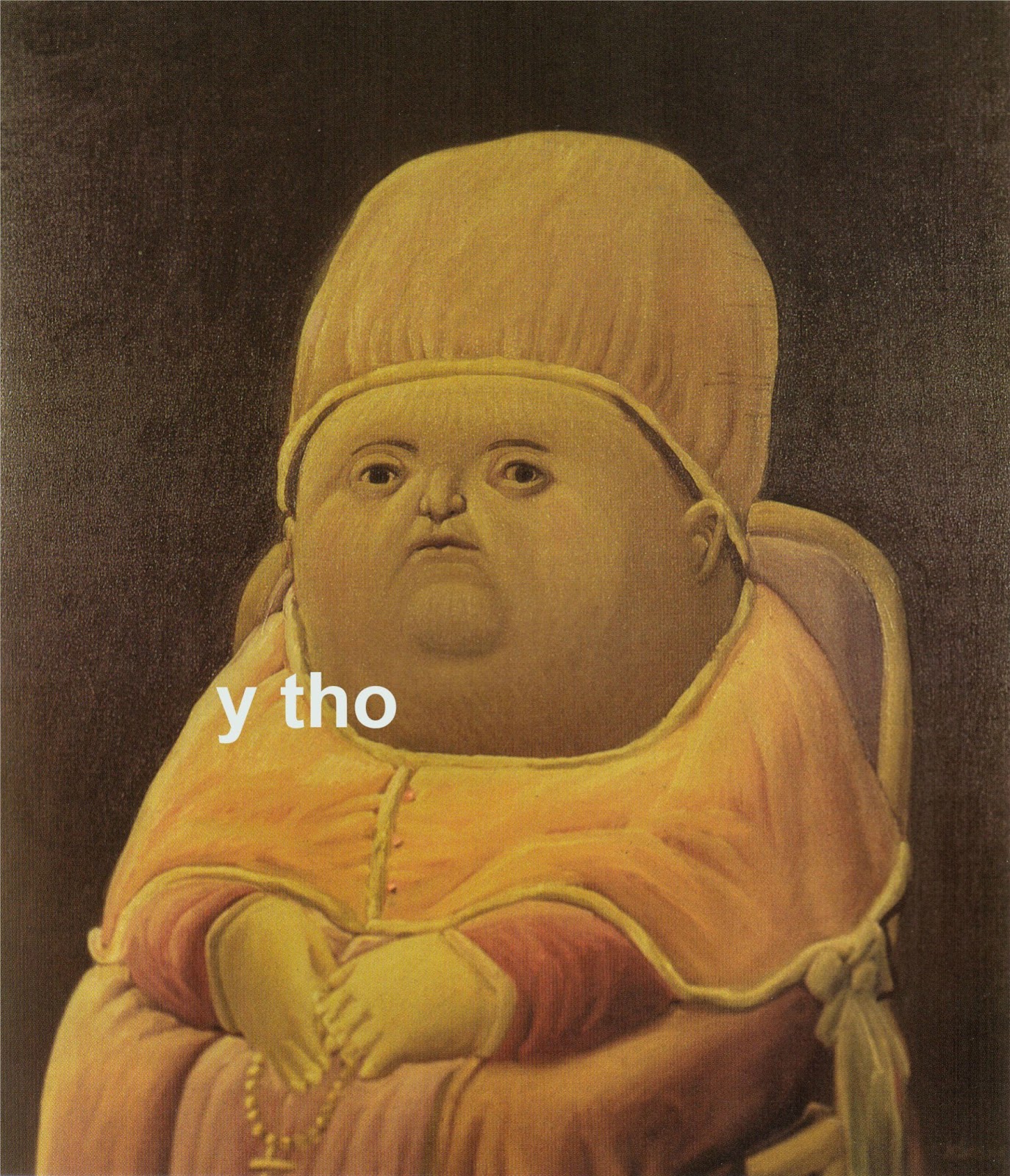 IGTV appears to be Instagram’s answer to YouTube. Again, consumption of mobile-video is at an all-time high. IGTV’s vertical video format is ideal for a mobile viewing experience. Meanwhile, no other social network holds a candle to YouTube in terms of a place to binge-watch.

Instagram’s looking to change that. The platform has promoted a fair share of influencers and YouTube personalities to help build buzz for the IGTV as it’s still getting off the ground.

While the emphasis might seem to be for big brands now, the fact remains that anyone can start uploading to IGTV.

And to get on the ground floor of the platform, it’s in your best interest to at least start experimenting as Instagram puts more and more into IGTV (think: ads are probably just on the horizon).

How to Get Started on IGTV

Signing up and uploading video to IGTV is easy.

Once signed into IGTV, simply click your account icon, swipe through the confirmation screen and boom. Channel created.

In terms of uploading content, all you need is a title and description to post your video. Descriptions on IGTV follow somewhat similar rules to regular posts (but more on that later). Note that you can also upload IGTV content from a desktop. 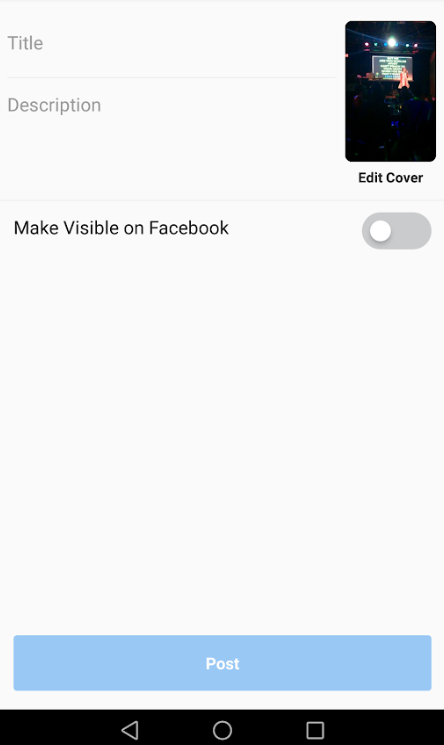 From Instagram themselves, here’s a quick rundown of the upload requirements for IGTV:

As noted, the most notable requirement of IGTV is that your videos have to be vertical. This means you can’t just take your existing YouTube of Facebook videos and dump them into IGTV.

How to Grow Your Presence on IGTV

If you’re looking to hop on the IGTV bandwagon, your head is in the right place.

The sooner you get on board and understand the platform, the better.

Since IGTV is still relatively young, the platform does still somewhat feel like the wild west. Even so, there are some notable trends from brands who are already gaining significant engagement via IGTV.

Based on what we’ve seen so far, here are some quick best practices you should follow as you learn the ropes.

1. Optimize Your Descriptions and Cover Photos

The big difference between IGTV descriptions and traditional captions is that IGTV actually allows you to tack on a link, too.

As with any post, it helps to have a hashtag strategy in mind when publishing to IGTV. Since you have to explicitly tap the top of a video to see its description, going hashtag-heavy is fair game.

Remember that the “For You” recommendations can be based on hashtags, so there’s really no reason why you shouldn’t add a few onto your descriptions.

Another unique aspect of IGTV is to post covers for your video much like you would a YouTube thumbnail. Although not all brands do this, it’s a subtle way to make your video seem more polished and tap-worthy.

Below is a subtle example from Rhett & Link. Note that the video preview is a bit clickbaity and exaggerated, but it’s also the exact sort of thing you’d see in a YouTube thumbnail. Compelling cover photos are a smart alternative to some random screenshot, if nothing else. 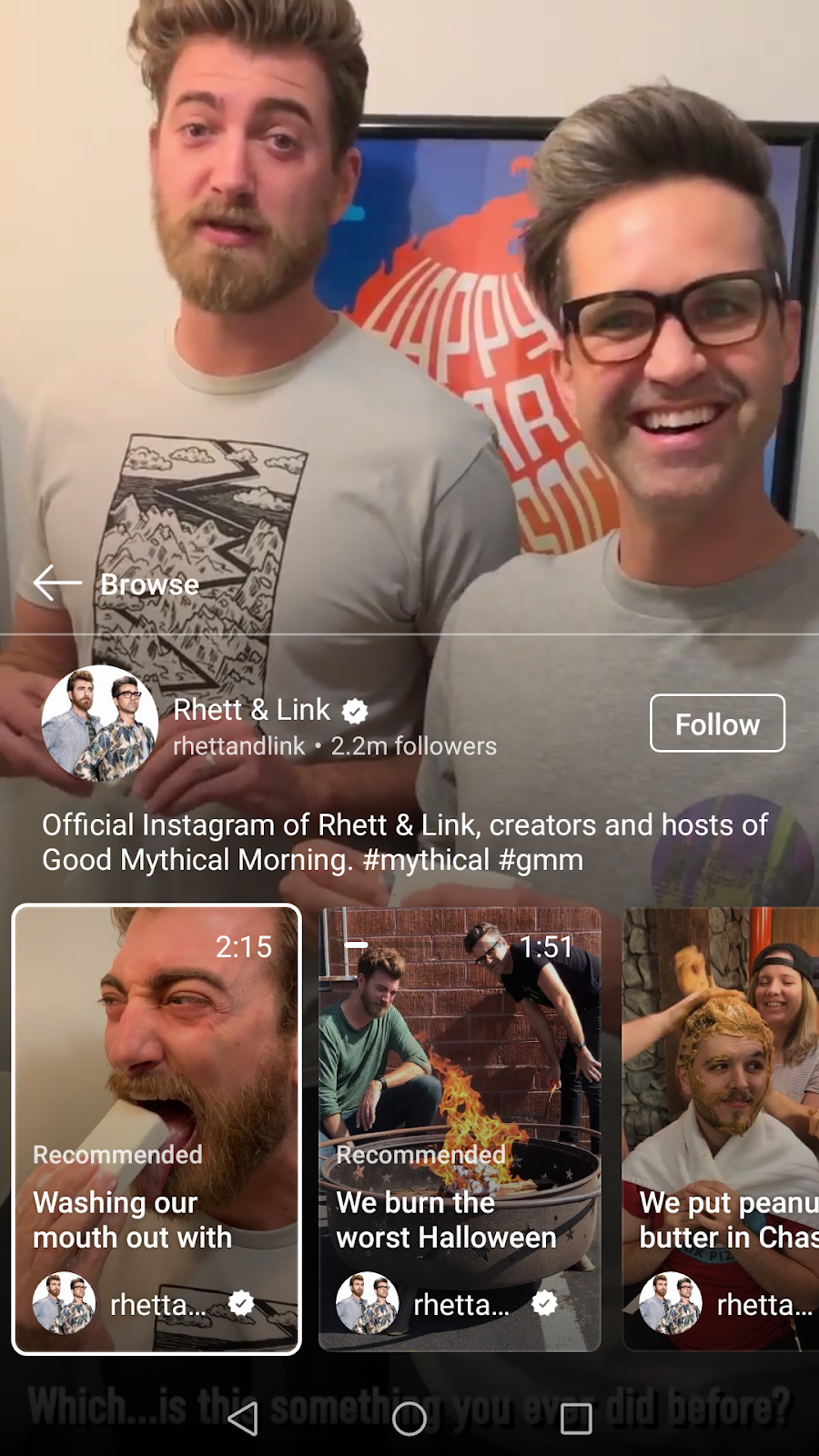 Instagram recommends a cover photo size of 420 by 654 pixels (a 1:1.55 ratio). As of this post, you can’t edit cover photos after uploading so just keep that in mind.

Reality check: a lot of your fans and followers might be totally in the dark about IGTV.

It might be months or even years before the platform really takes off ala Stories. This is why it’s smart to get a step-up on competing brands and establish a fan following on IGTV.

You can use your regular posts to point to your IGTV content, either through the #IGTV hashtag or providing a sneak peek of something new you just posted.

Note that when somebody follows your account, they can instantly see your IGTV content when they log into the platform. On the flip side, anyone who ends up following you via IGTV also follows your regular account. That’s why it’s a good idea to cross-promote your content as IGTV is still growing.

3. Show Off Your Best Footage

This means that if you work with professional video you have yet another channel to promote to. Additionally, transitions, overlays and other effects you can achieve in the likes of Final Cut Pro or iMovie can help give your IGTV content a cinematic feel that we don’t see from most social video.

Below is a prime example from Visit Melbourne. These epic, sweeping shots and drone footage are a far cry from apps like Boomerang, right?

Here’s another good example from Ipsy. This how-to tutorial was clearly professionally edited and looks like something that could have come from Facebook or YouTube. Whereas a lot of what we see on Stories or Instagram’s native video is off-the-cuff, IGTV encourages this sort of content.

But we have to reiterate that anything you’ve created in the past may need to go through significant edits before it goes on IGTV. Between the resolution and sizing requirements, you might need to do some fine-tuning with your existing footage.

Just like actual television has episodes, some brands on IGTV are created their own sorts of “series” just for Instagram.

For example, Buzzfeed Australia rolled out its “Bach Chat” to coincide with eliminations predictions from the current season of The Bachelor.

The benefit of creating episodic content on IGTV is that it all sits in one feed rather than being interrupted by your other posts on Instagram.

Not only that, but the longer time limit lends itself to more in-depth video in the first place. Making what you’re posting exclusive to IGTV likewise compels more people to check it out.

Although you can go the professional route with your IGTV videos, there are plenty of brands that are still posting simple, unpolished content while getting some serious love.

Since IGTV is so new, there really are no “rules” right now. Behind-the-scenes footage of your business or brand in action or attending an event still works well for IGTV.

In fact, brands can position their IGTV presence as a place to see the human side of their business or what they wouldn’t normally see in their traditional feed.

This is a tip that might seem somewhat backwards, but especially makes sense as IGTV continues to gain steam.

There’s an oft-cited statistic that 85% of Facebook video is watched without sound. Although that figure might be different for IGTV, it does speak to the fact that not all viewers are necessarily interested in being blasted with audio.

This makes sense, too. Much like you might watch something subtitled at the airport or at a doctor’s office, having subtitles on your videos offers for a totally different viewing experience.

In short, adding them ensures that you’re appealing to 100% of audiences. Whether through traditional editing software or tools like Animatron, taking the time to create subtitles might be something worth experimenting with.

If you’re scratching your head about what to do on IGTV, don’t panic.

Well, why not take some of the principles from your stories content and apply it to IGTV? We’re already seeing this from brands both big and small.

While Stories and IGTV might be apples and oranges, some small tweaks to your Story-style content can be applied to the platform.

This lipstick tutorial from Sephora Australia is a good example. The direct, one-shot format is simple like a Story or native but takes advantage of IGTV’s time limit so that the how-to is uninterrupted.

Same rules apply to this IGTV post from Pilates and Co. Gold Coast. A single shot and nothing crazy, but still an interesting piece of content that’s not hindered by a time limit.

This interview series from EF Perth also feels somewhat like an extended Story. The text overlays manage to break up the content, all the while IGTV allows the series to flow.

This piece is actually a good example of how you could potentially double-dip your IGTV content for Stories and vice-versa.

And with that, we wrap things up!

Are You Plugged Into IGTV?

The main takeaway here is that just about any brand can adopt a video strategy that works on IGTV.

It’s totally up to you.

And since the platform is still relatively young, there’s no better time to get on the bottom floor, so to speak.

Anything brands can to tap into their audience’s binge-watching tendencies is a plus.

IGTV is here to help us do just that.