Like many internet trends, it’s hard to believe that there was a time before Instagram.  Now that its into double figures, it’s a great time to look back at the app’s journey that has changed the way that we dress, eat and, of course, binge pictures of cute dogs.

Instagram was released to the public on the 6th of October and quickly had great success. Two months later in December, the app already had over one million monthly active users (MAUs) posting and sharing their favorite snaps with the public.

A portmanteau of “Instant Camera” and “Telegram” the app was well timed to find its niche. This is because at that time Facebook's mobile app was not up to the task and Twitter was more concerned with words than sharing photos. IG also found a great way of adding picture filters, masking the terrible mobile camera quality of 2010, and making it easy to share socially.

The first ever Instagram Post by one of the founders, Mike Krieger, and it wasn’t quite what you’d expect.

It looks like a rushed wonkey picture out of the window far from the polished aesthetic we’re used to today.

However, a photo a few hours later, by the other founder Kevin Systrom, foreshadowed the app's obsession with all cute animals.

Instagram borrowed the humble hashtag from Twitter to help users to categorize and find content. Only a few years older than Instagram, the hashtag is an essential part of how we use social media today. Back then it was the wild west of hashtag usage and early attempts to make a new #s makes us marketers cringe today. #Do #you #remember #this?

The top 5 hashtags used to date are:

Within 24 hours, it was downloaded more than one million times.

Before the launch users were able to sign up to a waitlist which had over 430,000 users. Systrom said that sign-ups were coming in at a rate of 2000 a minute. Something that every entrepreneur could dream of.

Facebook buying Instagram was met with resistance at first, with users wondering how the new owners would handle the platform. Instagram still has independence as a brand and certainly a different user base and feel but with FB messenger taking over IG Direct it seems the facebook family looks to be getting closer than ever.

Social media is always better with friends. With the option to tag your mates in photos, (and to remind them how much they had to drink last night) Instagram brings users together with this feature and adds a ‘photos of you’ tab.

We know today that video is the best type of content for getting your message out there. Easy to consume, more-ish and performs great in the algorithm. But back then it was great to see videos on the timeline just because it meant more ways to love @dogsofinstagram.

The OG of #sponsored.

The introduction of sponsored content on Instagram was of course met with some backlash but now the site has fine tuned it’s ad content to be more relevant and provides a great way for brands and customers to interact.

Users can now slide and continue to keep sliding into DMs.

Instagram, like Twitter, is a public social network so when they added the direct messaging tool it was a step in a new direction. They do filter users that you are not following into a seperate box, however, to avoid spam.

The success of sponsored posts in America, Australia and other trial countries means that they release ads globally as Facebook monetises the platform.  IG now has over 25 million business profiles worldwide.

Originally a stand-alone app that turns a short burst of photos into a 1 second gif that loops forwards then reverse. At 5 years old Instagram was experimenting with new ways to keep it’s feed fresh and exciting.

This update was huge in shaping the Instagram that we know and love today. Previously, the app's feed would be from oldest to newest. According to Insta this meant that users missed upto 70% of their feed. The new feed is “ordered to show the moments we believe you will care about the most”. Now the algorithm works its magic behind the scenes and if you are anything like us, that means putting dogs front and center.

The new bold look captures Instagram’s changing aesthetic and user base to be a cleaner more modern app. The layout gets a facelift too. Ian Spalter, Instagram’s head of design, wanted “a simpler, more consistent design that helps people’s photos and videos shine”. 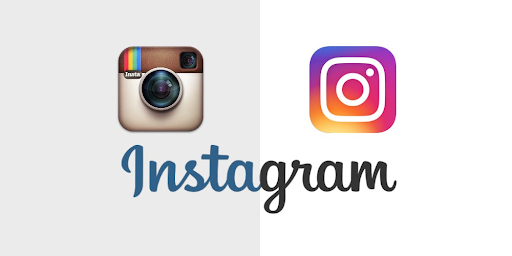 Instagram took the best part of snapchat and made it their own, with the swagger that only a brand that big can have. In August 2016, they released a new feature - Stories. They are essentially videos up to 15 seconds that self-destruct after a short amount of time. This kind of content sought to break the carefully curated feeds and give people a chance to post silly stuff or daily updates that didn’t have to compete for likes with the more serious posts on their feed.

Mobile cameras and screens were getting better and people wanted to be able to get a closer look at some of the amazing photographers sharing their snaps.

Users have the option to broadcast live on IG for up to an hour. This is a great way for users to connect with their audience in a fresh new way. AMAs, live tours and even seeing how many elastic bands can fit around a watermelon before it bursts are all the rage.

This takes their leap into video to the next level. With an autoplay, channels and more, IGTV continues the shift towards video. This now means that creators can post permanent videos of up to an hour on the platform. Originally it took a strong stance on vertical videos it now allows for horizontal too.

History is made. Previously, the most liked post on Instagram was the birth announcement of Kylie Jenners’ daughter sitting at 18m likes. In a fun self conscious joke, a picture of a simple egg was posted The caption called people to set a new world record for the most likes. It broke Jenners’ record in just under 10 days and it currently sits at a crazy 54 million likes.

Let’s set a world record together and get the most liked post on Instagram. Beating the current world record held by Kylie Jenner (18 million)! We got this 🙌 #LikeTheEgg #EggSoldiers #EggGang

Instagram wants to be the kind of place where users can act freely and feel as little ‘social friction’ as possible. As a result last year they got rid of the following tab. That tab alone was probably responsible for a huge number of breakups as significant others were caught liking a few too many posts of people they shouldn’t have.

To say that the first half of 2020 was stressful is an understatement. In May, Instagram released a new feature for some profiles - Guides. The option sits between posts and IGTV and aims to display content focused on improving the well being of its users. @Headspaceaus have a great one if you’ve missed it.

They went and did it again but in classic Instagram style they did it better and with perfect timing since its competitor TikTok was on the back foot due to privacy concerns. Reels allows you to record a 15 second video with music and a heap of cool effects.

Today - Where are we now?

Now we are all caught up, it's incredible to think of Instagram’s journey and how it is now a central part of our online experience.

100M+ Photos and Videos are shared/day

The Future - Where will we go?

It’s hard to predict anything these days but the future is surely bright for Instagram. As modern users are more aware of fake news and fake users, huge numbers of bots have cleared from the platform. This leaves more space for genuine content and a better overall experience on the app. Influencer marketing will surely continue to gain popularity, especially nowthe IG shop gains wider functionality. Perhaps the biggest area of growth will be in video as Stories, IGTV and the new Reels all feature prominently on the explore pages and our feeds.

Has all of this reflection got you nostalgic? Let us know some of your early Instagram memories in the comments below.

If you are looking to build a winning social media strategy and want to call in the pros, drop us a message and we can help you reach your #goals.