And that doesn’t even scratch the surface.

Try as you might to avoid “getting political,” the fact remains that brands today are expected to take a stand on social issues.

After all, flat-out ignoring social movements and politics might make your brand seem tone-deaf.

However, note that trying to piggyback your marketing on sensitive topics can result in calls-outs and (understandably) angry customers.

So, how should brands approach activism and politics? Should they approach them at all?

Below are the dos and don'ts of tackling these sorts of topics and tips for doing it tastefully.

Don’t: Totally Shy Away from Social or Political Issues

Conventional wisdom tells us that brands should avoid politics like the plague, right?

Times have changed, though.

According to recent data from Sprout Social’s #BrandsGetReal survey, a staggering 70% of consumers expect brands to chime in on political and social issues.

This rings true across the entire political spectrum, by the way.

We’re seeing companies of all shapes and sizes embrace activism right now. From racial justice to climate change and beyond, taking a stand isn’t reserved for a particular industry or “type” of brand.

If you have an audience, you essentially have a voice. 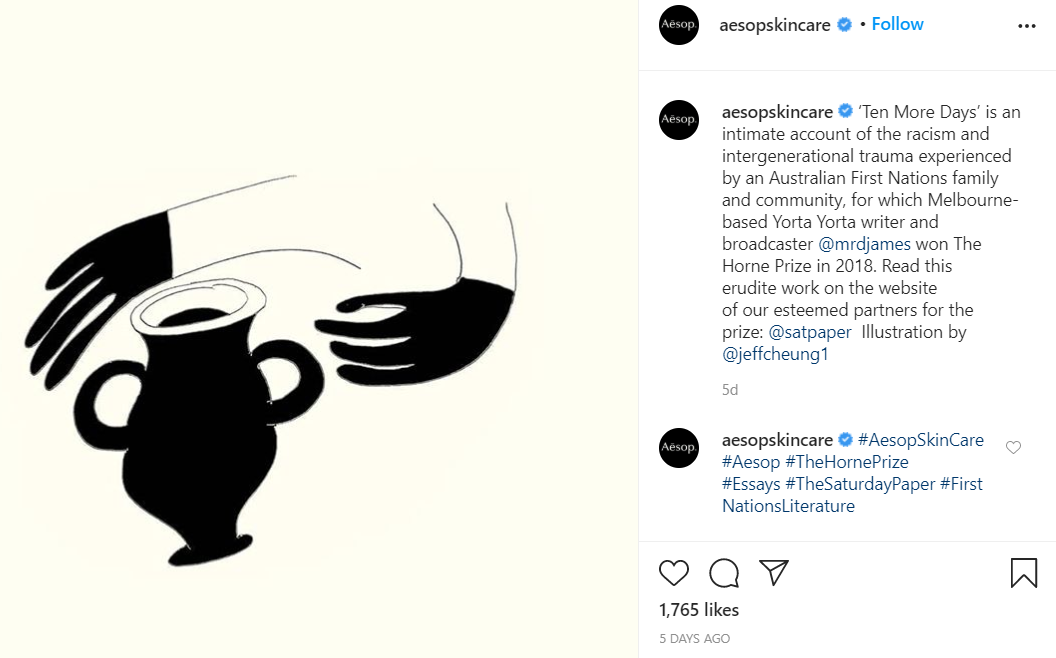 Keep in mind that the mere notion of “getting political” is somewhat flawed. Doing so isn’t a chore or something your brand should feel forced to do.

Addressing issues such as healthcare or racism isn’t necessarily about politics, either: it’s about human rights.

Sure, hot-button issues become part of political narratives. That said, taking a stand shouldn’t feel controversial if you’re focusing on causes that you and your brand actually believe in.

Do: Educate Yourself and “Read the Room” Before Taking a Stand

Again, brands shouldn’t hop on the bandwagon of activism for the sake of marketing.

We often see brands in the United States come under fire from consumers and fire on social media for this exact reason.

Food for thought: a 2019 analysis notes that two in five companies that boasted Pride Month campaigns donated absolutely nothing to pro-LGBT+ causes after-the-fact.

Yikes. There’s a reason why critics are sticking it to companies for turning Pride Month into a sort of “branded holiday.”

Before you address a cause or issue, it’s important to reflect on what you want to say and whether or not you’re adding anything meaningful to the conversation.

You might also want to consider specific actions you can take as a brand to showcase your commitment to a cause (think: donations, community events, etc).

And of course, brands at large should be aware of major social and political issues regardless of whether they’re taking a stand on them. This means educating yourself on issues such as trans rights or systemic racism, for example.

If you don’t know whether a comment or campaign makes sense for your brand, err on the side of listening before speaking.

Do: Focus on Issues That Align With Your Brand, Customers and Audience

Ideally, your brand should have a pulse on the sorts of social issues that your audience cares about.

If so, you don’t have to rack your brain trying to figure out if taking a stand makes sense or not.

Although activism and social issues are universal, some brands and businesses have an easier job of speaking out than others..

For example, cruelty-free beauty or vegan brands have every reason in the world to talk about animal rights. Meanwhile, outdoor or sports brands can do the same with climate change and environmentalism.

Many beauty brands (like Original Mineral) are somewhat progressive and make a point to highlight their audience’s diversity. Based on the overwhelmingly positive response from followers, it’s clear that “getting political” doesn’t have to result in some sort of hate mob. Quite the opposite, actually. 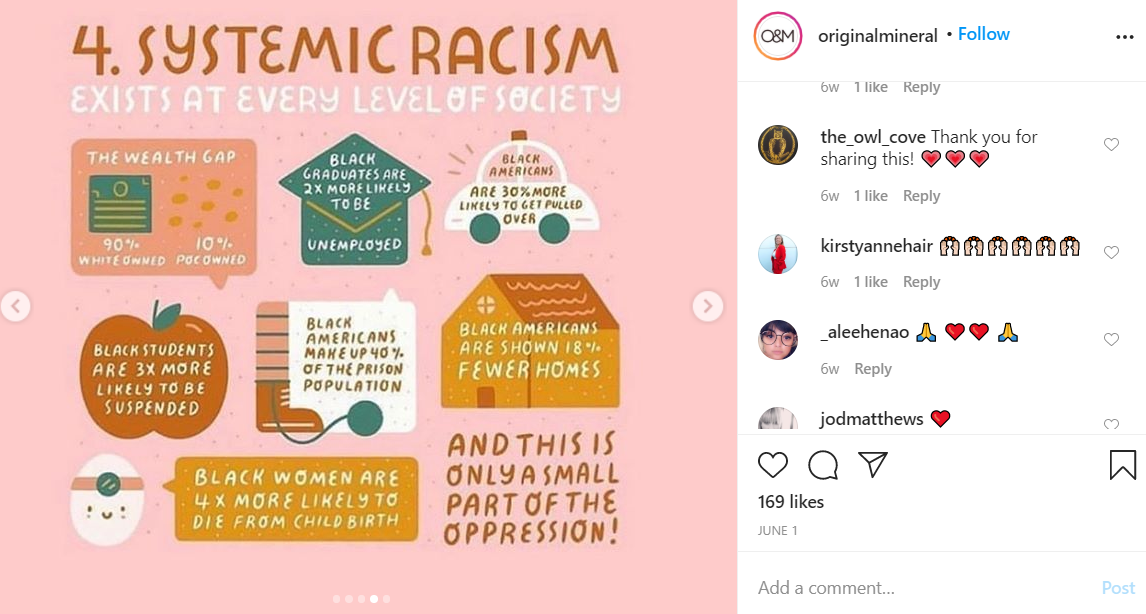 Don’t: Argue with Trolls or Engage with Needless Call-Outs

Sometimes taking a stand can result in some pushback from your followers.

Let’s say you get hit with some hate comments or trolls. Do you delete them? Block ‘em? Ignore?

The short answer: it depends.

It’s not uncommon for brands who speak out on “political” issues to get brigaded on social media by nay-sayers. Look no further than any comment section of a major American brand on Facebook or Twitter that supports Black Lives Matter or even something as simple as wearing a mask to prevent the spread of COVID-19.

Obvious trolls and offensive comments should be dealt with. However, you don’t necessarily need to debate with followers publicly. Chances are you’re not going to change their minds.

If you see a mostly positive response and have a few haters, don’t sweat having to go into crisis management mode. Social media moves quickly, after all.

Do: Clarify Your Positions to Customers, Collaborators and Employees

There shouldn’t be any question marks around what your company stands for socially.

For example, your company’s stance on any given issue should be crystal clear both internally and for your customers to see. The latter can be done through a notice on-site or through an announcement in your email newsletter.

Being upfront about your beliefs not only means consistency in terms of your messaging but also that your employees, content creators, colleagues and customers are on the same page.

For example, check out how Vans Australia explains their stance on racial justice... 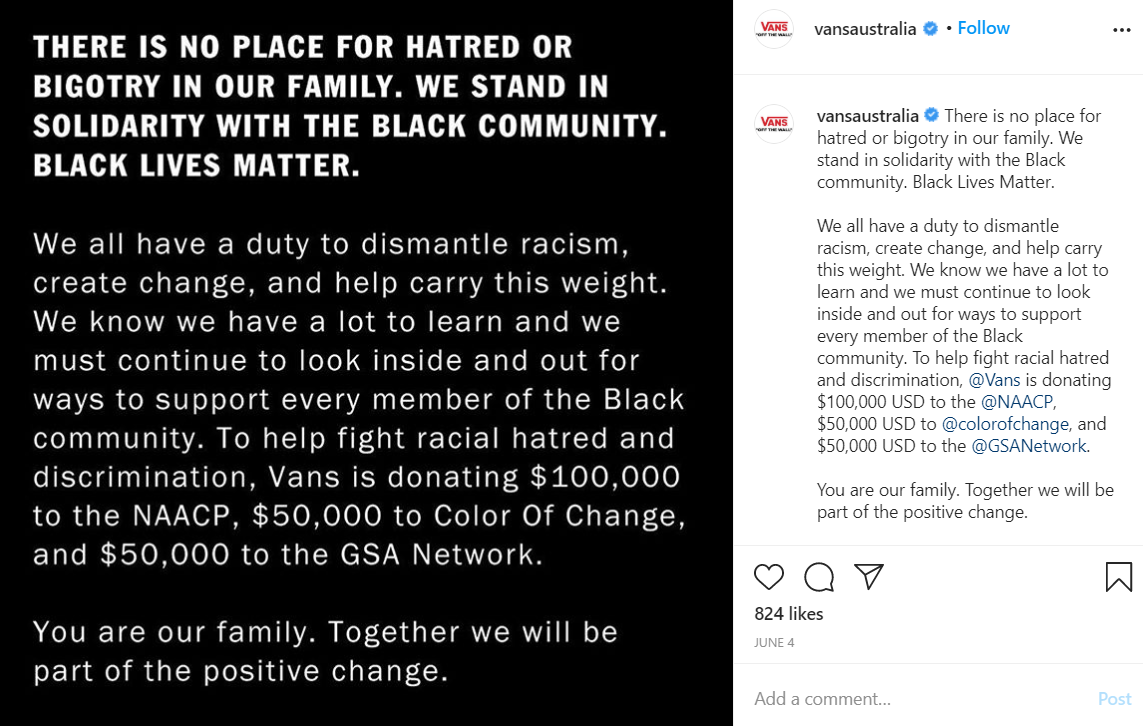 ...and then uses their site to highlight the specific actions they’re taking as a company to back up their campaign. This immediately shuts down anyone accusing them of “virtue signaling” or trying to market on top of a social movement. 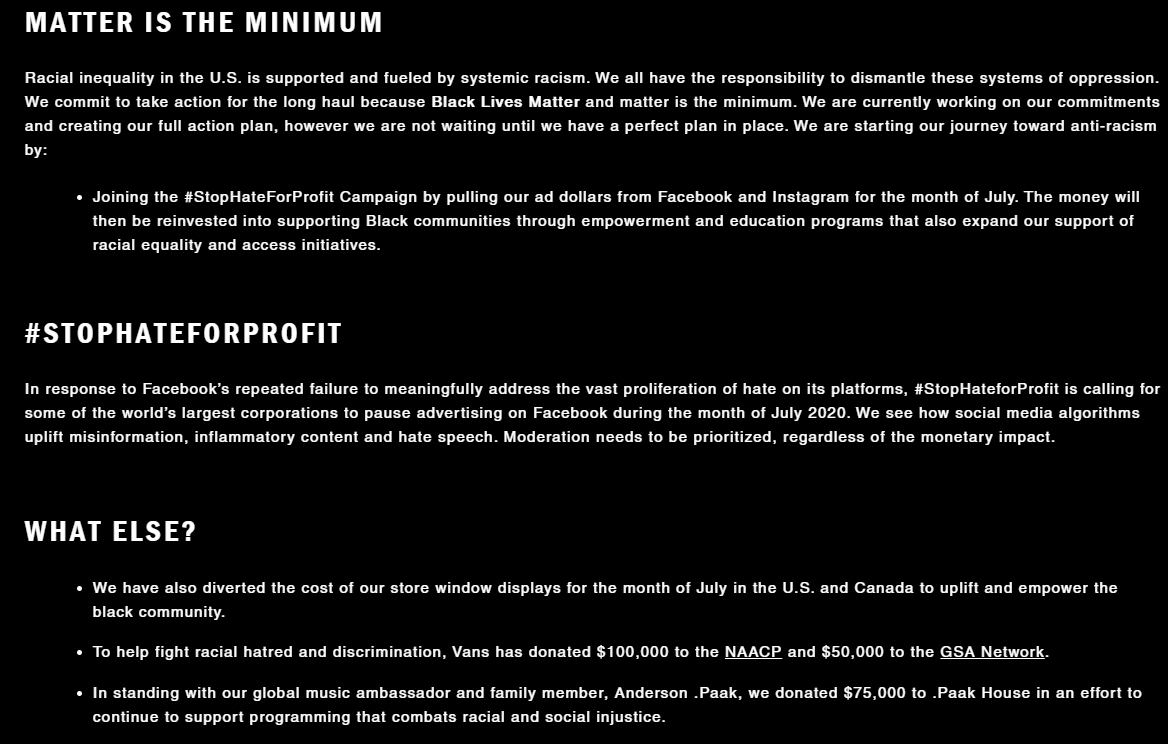 See how that works? This level of thought and organization is what brands on social media should strive for when it comes to political or social issues.

Has Your Brand Taken a Stand on Social Media?

Addressing potentially sensitive topics on social media can be tough, but doing so is becoming more of an expectation rather than an exception to the rule.

As long as you educate yourself and focus on issues relevant to your audience, your head’s in the right place.And if you need any help figuring out your brand voice or how to engage with a particular issue on social media, be sure to contact Hello Social today.